Why I paint dirt roads? Bob Dylan himself explains

In 1974 I played the first of many shows with the Band—maybe in eight years. We were in a hockey arena in Chicago. There were maybe 18,000 people there. The Band and I hadn’t played publicly together since 1966 where our shows caused a lot of disruption and turmoil—a lot of anger. Now we were in Chicago starting up again.

There was no way to predict what was going to happen. At the end of the concert we had played over 25 or 30 songs and we were standing on the stage looking out. The audience was in semi-darkness. All of a sudden, somebody lit a match. And then somebody else lit another match. In short time, there were areas of the arena that were engulfed in matches.

Within seconds after that, it looked like the whole arena was in flames and that all the people in the arena had struck matches and were going to burn the place down. The Band and I looked for the nearest stage exit as none of us wanted to go down in flames. It seemed like nothing had changed. If we thought the response was extreme on the earlier tours we played, this was positively apocalyptic.

Every one of us on the stage thought that we’d really done it this time—that the fans were going to burn the arena down. Obviously we were wrong. We misinterpreted and misunderstood the reaction of the crowd. What we believed to be disapproval was actually a grand appreciative gesture. Appearances can be deceiving.

For this series of paintings, the idea was to create pictures that would not be misinterpreted or misunderstood by me or anybody else. 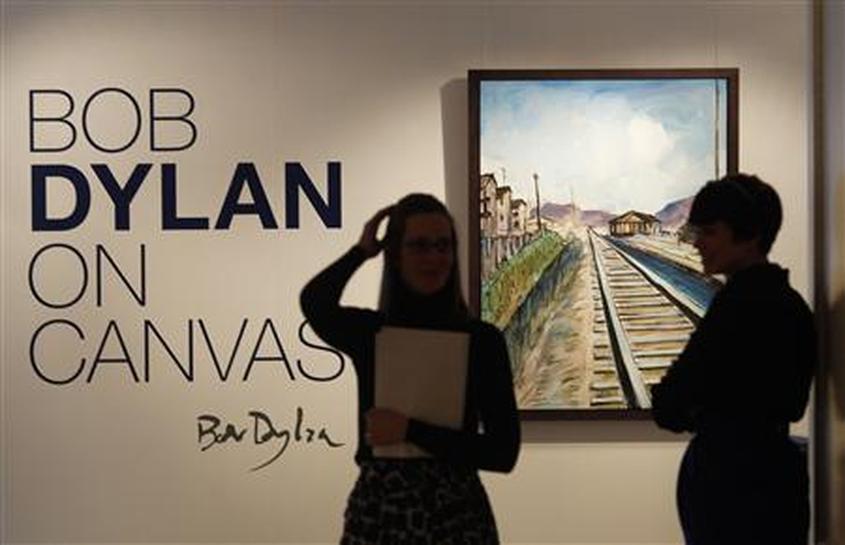 When the Halcyon Gallery brought the idea of me doing American landscapes for an exhibition, all they had to do was say it once. And after a bit of clarification, I took it to heart and ran with it. The common theme of these works having something to do with the American landscape—how you see it while crisscrossing the land and seeing it for what it’s worth. Staying out of the mainstream and traveling the back roads, free-born style. I believe that the key to the future is in the remnants of the past. That you have to master the idioms of your own time before you can have any identity in the present tense. Your past begins the day you were born and to disregard it is cheating yourself of who you really are.

My idea was to keep things simple, only deal with what is externally visible. These paintings are up to the moment realism—archaic, most static, but quivering in appearance. They contradict the modern world. However, that’s my doing. The San Francisco Chinatown street stands merely two blocks away from corporate, windowless buildings. But these cold giant structures have no meaning for me in the world that I see or choose to see or be a part of or gain entrance to.

If you look half a block away from the Coney Island hot-dog stand, the sky is littered with high rises. I choose not to see them either. Down the road, across the highway from theCabin in the Woodsis a manicured golf course. But it has little meaning compared to the seemingly worthless shack which speaks to me. The Alabama Side Show is surrounded by woods in all directions. The side show happens to be in a clearing and you go there by dirt road. I chose to paint the side show instead of the endless woods. There are countless other works where this is also true.

All the iconography is used in a semi-conscious way. I chose images because of the meanings they have for me, and patterns can be seen in the repeating images—roads, shacks, piers, automobiles, streets, bayous, railroad tracks, bridges, motels, truck stops, power lines, farmyards, theater marquees, churches, signs and symbols, etc.—all establishing a certain type of compositional value. I would say the purpose is plain, non-experimental or exploratory.

“Endless Highway 1” by Bob Dylan | Courtesy of the artist

Some of these works have much complexity of detail. Some are less demanding. In some cases my hand couldn’t do what my eye was perceiving. So I went to the camera-obscura method. The camera obscura was a primitive camera invented in the 1600s which projected an image upside down so the painter could work from it. This was a real camera, but the image was not printable. It could only be seen and filled in. Caravaggio used this in about all of his paintings and so did Van Eyck and Vermeer. These days you don’t have to go to all that trouble. You can use a real camera.

The watercolors and acrylics done here purposely show little or no emotion, yet I would say they are not necessarily emotionally stringent. The attempt was made to represent reality and images as they are without idealizing them. My idea is to compose works that create stability, working with generalized, universal, and easily identifiable objects. Throughout, there is the attempt to depict scenes of life and inanimate life for their own sake (Ice Cream Shack, Arcade, Threatening Skies). Da Vinci paints a blurred picture—you see no lines but clouds that fade into one another with different color schemes. An opposing view would be Mondrian and Van Gogh with strict lines that define the volumes of space. In the middle somewhere would be Kandinsky and Rouault. And these paintings would probably fall into that category.

Flowing or curved lines form another visual vehicle, suggesting a far distance in a landscape painting. Architecture itself is always a vital source of ideas and inspiration, but, always, The Beaten Path tries to return to the traditional methods of perceptions—things that are perceived in the visible world—taking the three dimensional into a two dimensional format using contrast, location, isolation, and convergence.

If there is a soundtrack to this compilation of paintings, I would say it could be recordings by Peetie Wheatstraw in some places, Charlie Parker in others, Clifford Brown or Blind Lemon, maybe Guitar Slim—artists that make us a lot bigger when listening to them. It would have to be that way. Absolutely.

This post is an excerpt from the catalogue essay of Bob Dylan, The Beaten Path on view at Halcyon Gallery in London from November 5 through December 11.